skip to main | skip to sidebar

In the thirty-eight miles of railroad between Montpelier and Wells River, there is only one full-length mile of straight track--and that is in Plainfield!...Charles Edward Crane 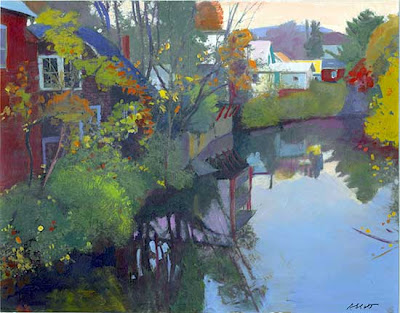 I'm not quite sure why Mr. Crane thought it was so remarkable that the only straight track on that rail route he describes above was in Plainfield, but I would have to agree that "straight" is definitely not a word that I'd associate with this town at the bottom of my hill. "Quirky" and "sleepy" are more what come to mind when I drive down to Plainfield to shop at the co-op or pick up a pizza. 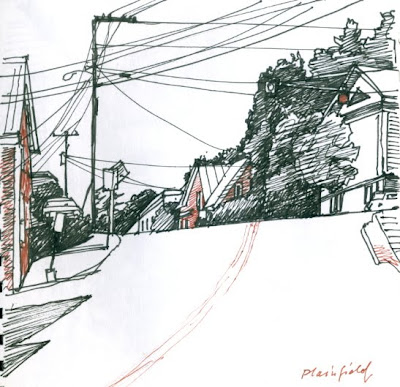 Plainfield lies along both sides of Route 2, that busy two-laner that runs across the northern U.S. Even before this major road was paved in the early 1900's, Plainfield was an enterprising place, with farms in the hills and valleys, and mills and hotels on the ponds and streams. The Winooski River attracted both tourists and small industries, and the rail line shipped milk and butter, wood and textiles. Little Plainfield could take care of itself.

Nowadays things are diferent, and Plainfield has the feel of being a bit of an afterthought along the highway, more of a place to ride through on your way to somewhere else than a destination. When I've stood on the sidewalk painting in Plainfield (and you can't help absorbing your surroundings when you are standing behind an easel) I've been unhappily surprised at the amount of noisy truck traffic driving through town, and by how many young folks walking by me look like they've already seen better days. It's a place that seems like it could use some good old 19th century industry and tourism... 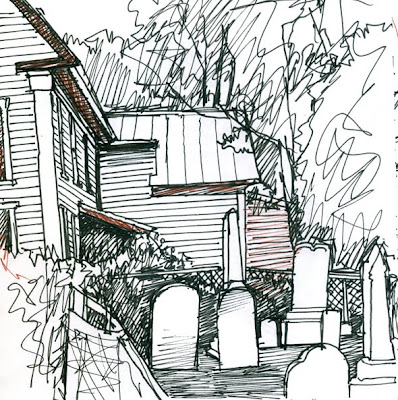 But--I've also discovered that Plainfield offers plenty to see and do, if you get out of your car or out from behind your easel and do some exploring. There's a fine natural foods co-op that's charmingly sited next to an historic cemetery. The Country Bookshop, housed in an old cape on Mill Street, is good for hours of browsing (and had THREE different editions of "The Education of Henry Adams" available when the urge to own that book came on me recently.) Strangely enough, tiny Plainfield used to have two nationally famous restaurants (Chinese and Southern) and then had a tapas place, but now is down to a sole tasty Italian establishment. The town's two blocks also host an art gallery and a yoga studio, a shop for artisan beer makers and a bead store. 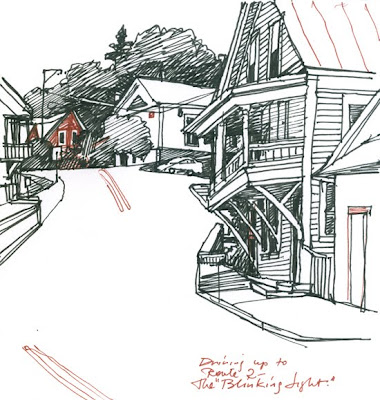 This arty and eclectic mix of commerce gives a hint of why I'm glad I settled up the hill from Plainfield. If you throw a stick into the woods around here, you will probably hit a painter, a poet, a potter, and/or an eccentric. That's probably true of much of Vermont, but in these environs the concentration of non-conformists is especially thick because of Goddard College. Goddard was conceived by it's founders in the 1860's as a progressive educational institution that would foster "plain living and hard thinking". By the 1960's it was a free-spirited anti-institution that attracted oddballs from around the country who grew up to be my very interesting and accomplished neighbors.

So if the only thing straight about Plainfield is the railroad track--now a bike trail--that's fine with us.
Posted by Susan Abbott at 1:12 PM

What's This Blog About? 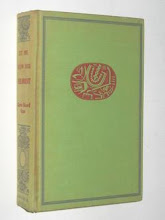 The first book I bought when I moved to Vermont over a decade ago was “Let Me Show You Vermont”, a title that jumped out at me from a dusty corner in a used book store because it appealed to my obsessive curiousity about my new home state. Written in 1937 by Charles Edward Crane, this book’s vivid descriptions of Vermont’s rural past made a lost time come alive, and its faded black and white photographs showed places that still looked familiar. I wanted to jump in my car and drive dirt roads looking for those same country stores, farmhouses, dairy barns and one-room schools. Seventy years after Charles Crane showed us his Vermont, this blog is my own report (mostly a visual one, since that’s what I do) of what’s still here, what has vanished forever, and what may be coming to my wonderful adopted home state.

The color images are 8" x 10" mixed media (my black and white photographs hand painted with oils.) They are for sale to benefit Hurricane Irene flood relief efforts in Vermont. Click here for more information.
Sketches are Faber Castell Pitt sanguine and black pen in Cachet sketchbooks, and not for sale. 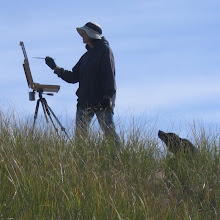